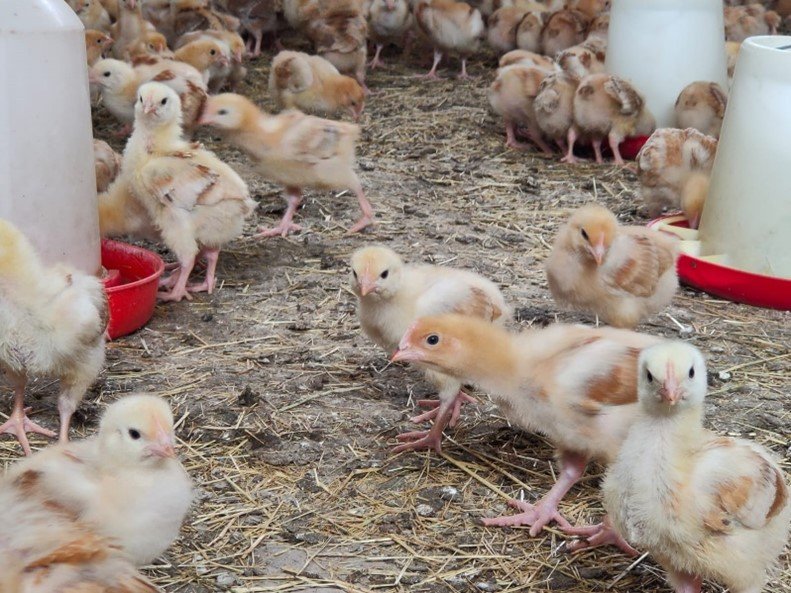 Poultry provides smallholder farmers with a pathway out of poverty

Last week, Hendrix Genetics team members travelled to poultry farmers around Asgori, Ethiopia to see for themselves that poultry does provide smallholder famers with a pathway out of poverty.

Mr. Belay started 5 years ago with a flock of 500 Sasso chickens. He received them as 1-day old chicks from EthioChicken and sold them at 35 days old to smallholder farmers in that area. Today, he has grown to have 5 farms from which he provides a total of 50,000 birds per year to smallholder farmers. Not only does this allow him to make a good living out of poultry but also he is able to directly employ 5 farm workers as well. His ambition is to double the size of his operation in the coming three years.

Later during the day, we visited three other mother units, hearing remarkably similar, and uplifting stories. After some start-up transitional difficulties with the first 500 1-day old chicks, all were able to successfully increase the size of their operation year after year. All the farmers were happy with the Sasso birds which thrived very well provided, they were given proper vaccination, feeding and housing. Each mother unit created a strong network of small holder farmers that are keen to buy the 35-day old chicks from them.

We also visited smallholder farmers and learned about their experiences with raising Sasso chickens. Tezeru Negesa is a smallholder farmer who has purchases 10 Sasso chickens from a mother unit every 3 months. Around 5 of these birds were kept and produced close to one egg per day, contributing towards feeding his family. The males and the surplus females were then sold on to the local market and provided cash to not only buy new chickens but also to support the family. Another smallholder farmer we visited had just recently started with chickens. He expressed some challenges he was facing and asked for advice. Using technical support provided by the team from Ethiochicken and governmental agencies, he is now equipped with the proper resources to help with his success.

Poultry is a solution that works!

It was great to see that poultry really works! Many people are involved, and their close collaboration is a key factor to the success we see. This includes all the smallholder farmers that buy Sasso chickens from the mother units to support their families as well as the farmers that take the big step to start a mother unit. Mother units are an essential step in providing access to Sasso birds for small holder farmers. Ethiochicken started 7 years ago with a hatchery and parent stock operation in Ethiopia to produce Sasso chickens for a largely undeveloped market for smallholder farmers. They are now producing close to 28 million one day old chickens which they deliver to mother units and setting up similar operations in Ghana and Kenya.

Going the extra mile to ensure everyone wins

Several people and organizations did go the extra mile to make this happen. It has now developed into a convincing case which ensures that everyone wins.

EthioChicken is a leading distributor of chickens to rural farmers in Ethiopia. EthioChicken produces dual-purpose day-old chickens from SASSO, affordable, blended feed; and train rural extension workers, thereby driving gains in productivity and creating a more stable and diverse supply of protein at the rural household level. Ethiochicken is the only private company in Ethiopia focused exclusively on reaching smallholder farmers, and has created an innovative, economically viable, and replicable distribution model to reach rural households. Using this model, Ethiochicken is producing around 28 million of DOCs per year and millions of households have been reached since they started.

Hendrix Genetics with the support of NEOGEN, experts in animal and food safety, has implemented genomic selection successfully into the SAPPSA (Sustainable Access to Poultry Parent Stock in Africa) p…

How genetics can contribute towards a socially sustainable industry

Agriculture, in particular the animal protein industry, faces many questions when it comes to societal concerns. How are we creating the right environment for the animals in our care? What are we doi…

On March 15-19, 5-day training sessions were held to educate the distribution members of the SAPPSA project on poultry management and give support in sales and marketing. The trainings were run in co…